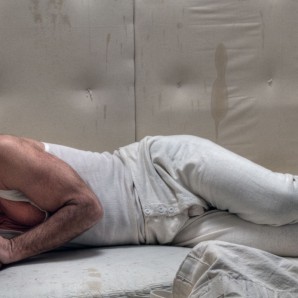 First take a look at the press conference with Simon Pummell during the Venice Film Festival.

The Dutch/British cooperation 'Shock Head Soul' by film maker and Piet Zwart Institute (PZI) course director Simon Pummell has been selected for the 68th edition of the Venice Film Festival. Pummell's film will take part in the Orizzonti competition. The prestigious festival, part of the Biënnale, will take place from August 31 until September 10 2011.

The film paints a picture of succesful German lawyer Daniel Paul Schreber, who claimed in 1893 that he received messages from God through a 'type writer' that spanned the kosmos. Schreber then spent nine years in an institution, where he suffered from delusions of cosmic control and the idea that he was slowly changing into a woman. During his confinement, Schreber wrote his now famous  'Denkwürdigkeiten eines Nervenkranken', in which he claims that his faith is a matter of religious freedom and that he was mentally able enough to return to society.

The film, which took five years to make, is a combination of documentary interviews, fictional reconstructions and animation. The story explores the boundaries between religious visions, misleading fanaticism and the intimate connection between family secrets, psychiatric diagnoses and our society's image of psychiatric diseases.

Pummell became known internationally when he received a British Academy Award (BAFTA ) for his transmedia project 'Bodysong' in 2003. He's not only a writer and director of documentary, animation and fiction, but also a researcher, tutor and course manager of Piet Zwart Institute's master in Media Design & Communication: Lens-Based.Barend Onneweer, head of WdKA’s bachelor course in Animation and tutor of the PZI master Lens-Based, was the visual effects supervisor on Shock Head Soul.

Shock Head Soul is produced by Submarine and Hot Property Films, in collaboration with Keith Griffiths Illuminations Films and in co-production with Serious Film. This production is supported by the Wellcome Trust, the Netherlands Film Fund and the Rotterdam Media Fund, with support from The Film Study Center at Harvard University. Besides a film, Shock Head Soul is also a research project affiliated to the lectorate of the Piet Zwart Institute Willem de Kooning Academy Rotterdam University.

First take a look at the press conference with Simon Pummell during the Venice Film Festival. The Dutch/British cooperation 'Shock Head... Lees verder